Where to Watch: Hulu

*Trigger Warning: Mental health is a civic action issue. Kidizenship aims to empower young people to have healthy relationships with media and their communities. This article contains discussion of suicide in a true crime case. Discretion is advised for all readers and TV viewers. The sensitivity of this difficult subject matter may be better suited to older audiences.

Millennials and Gen Zers know texting and social media can pose dangers to our mental health. For all the good they have in our daily lives, they also present serious problems: They alter our sense of reality and values, invite unhealthy comparisons, and create endless avenues for cyberbullying.

When I was in high school, people made fake Facebook pages to “expose” my classmates. They shared unflattering photos and videos without the subject’s consent. Texts and online messages were private until they weren’t. I knew social media could cause problems, but never did I think someone who claimed to love someone else would encourage them to end their life over texts. Not until this case.

Based on the Esquire article of the same name by Jesse Barron, The Girl From Plainville stars Elle Fanning as the infamous Michelle Carter and Colton Ryan as the late Conrad Roy III. The first episode introduces us to the teens through their text messages that fateful July of 2014. The first text is from Conrad, then 18, who types, “You’re the best thing that ever happened to me” to Michelle, then 17. They later joke about being Romeo and Juliet, and point to the fact that that relationship ended in death, an ominous foreshadowing for the tragedy soon to follow.

The episode tracks three perspectives: the Roy family’s, Michelle’s, and Detective Scott Gordon’s, the lead investigator on the case. Conrad’s grieving mother, Lynn, tries to make sense of her son’s suicide. They discuss the discovery of his suicide notes, their efforts to find him a therapist and medication for his depression and social anxiety, and whether the stress of his parents’ divorce ultimately led to his death. The family’s aftermath is full of sorrow and frustration, and further disrupted by disturbing behaviors from Michelle.

Elle Fanning’s portrayal of Michelle is one of the most intriguing and infuriating performances I’ve ever seen. Through interactions with her parents and teens she thinks are her friends, it is quickly apparent that they question Michelle’s connection to reality and emotional stability. They find it strange that she claims to be so in love with and distraught over Conrad when she’s barely spoken about him or seen him. Michelle desires attention and admiration so desperately that she performs on social media and with everyone around her. She wants them to believe how close she was to Conrad, how deeply she’s hurting, and how important her support is to the Roys.

The smart and adept Det. Gordon immediately requests the passcode to Conrad’s phone in evidence to search for a motive or sign. Social media has fostered heightened awareness of law enforcement, especially when they fall short of proper investigation and handling of cases. That made seeing Det. Gordon actively pursue what led to Conrad’s suicide in a case that could’ve been easily closed refreshing to see. He obtains two cases worth of call and text records between Conrad and Michelle, as well as a tablet on which Conrad recorded his mindset during his last days. From the texts, Det. Gordon discovers that Michelle went from discouraging Conrad’s suicide ideations to fully encouraging him to carry them out, including her making suggestions about different methods. One of her last messages eerily reads, “The time is right.”

Watch the next 7 episodes to see how everything unravels until there’s nothing but truth.

The Girl From Plainville | Trailer | Hulu

*Spoiler Alert: Case details below may spoil the viewing experience of the limited series.

Known as the “texting suicide case,” Commonwealth v. Michelle Carter received such national attention that it was believed to set a legal precedent for other states as to what actions constituted criminal responsibility, especially given the use of digital means in today’s world. Michelle was indicted and arraigned in February 2015 for involuntary manslaughter. The judge found her guilty in June 2017 and sentenced her to 15 months in prison with five years of probation. In January 2020, Michelle was released three months early for good conduct.

Her parole is set to end in August 2022, at which point she’s legally allowed to profit from her story. Does Michelle now know she is not the damsel, the heroine, or the martyr? Only time will tell. In the meantime, we can only hope that others have learned from her consequences.

If you or someone you know is struggling with thoughts of suicide, please visit the National Suicide Prevention Lifeline website or call 800-273-8255.

Interested in more portrayals of the case? Watch I Love You, Now Die: The Commonwealth Vs. Michelle Carter (2019) on HBO or Conrad & Michelle: If Words Could Kill (2018) on Lifetime. 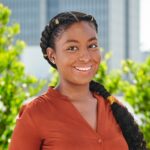 You Want to Save American Democracy? Join Your Student Newspaper

The rising generation of student journalists can improve their schools, restore dignity to news media, and